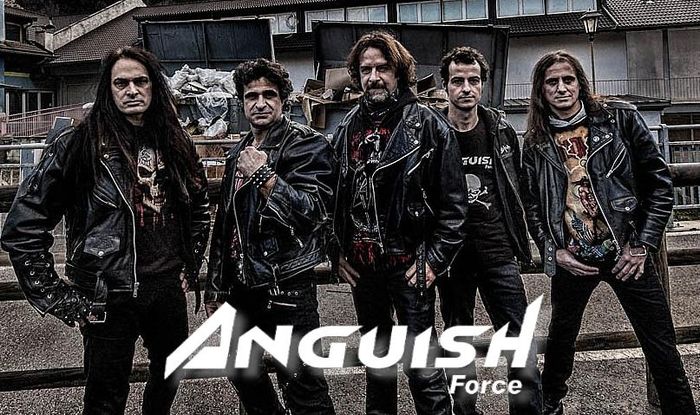 By Anguish ForceJanuary 30, 2016No Comments

Have any of you played in other bands? We have and we had almost all other projects but I consider secondary to Anguish Force.

How is it that you started playing music? In 1988 , as a great fan of Heavy Metal , I decided to start writing my first songs . Over the years it has become increasingly large and concrete and boyish dilettante I became the member of a band that has existed for more than 25 years .

What are your names? / Who plays what? / How old are you?

Except our drummer who has not attained the age of 40 , all others we have now long out of date .

Have you had other previous members? At least a dozen . In many years of the band , there were many people who have decided to take other roads . I think it’s a normal thing that not all have the same view of things and different objectives.

Did you make music even when you were young? As I said I started to strum the guitar just fourteen . At that time, however, my commitment was not as consistent because I was doing a lot of sports and I was a poor student commuter .

Where are you from? I was born and live in a small town near Bolzano, Italy. My origins are in the south of Italy that proudly keep the boisterous temperament.

What year did the band form? In the late eighties I wrote several songs and the first real training of Anguish Force (at that time only Anguish) dates back to 1995 .

What’s your style of genre? The metal of the ’80s without compromises. Hardrock, Heavy Metal, Speed Metal, Power and Thrash.

How often and where do you reherse? We are in the rehearsal room about twice a week. Sometimes because of the work we can play together only once, but we talk often by phone and do other things together.

How have you developed since you started with the music? Many things have changed. Before you could see to play together almost every day . Now you do not go to school and we all work . Many have family that has expanded over the years and so it is logical that many things have evolved. The most important thing is that the passion for Heavy Metal was always great.

Do you have other interests of work outside the band? If it comes to musical works can I talk to other side projects that I have had over the years. Often with the band members. In the past we have recorded an album with thrashcore Urban Violence and now I am waiting to release a disc of Metal neoclassical I recorded with a talented violinist. Finally, we are recording an crazy album Hard’n’Heavy with a project called Ice Suckers.

Are you looking for a booking agency, and what are your thoughts around that? Over the years we have changed from being self-produced to be in the label. We currently work with a German label with which we are also members. For the future we hope to enlarge our range. After more than twenty years of sacrifice maybe we can pick up some fruit more. The press office of a certain level would be something that should be proportional to a profound work of a label.

Are you looking for a label, and what are your thoughts around that? As I said, the label we have it already but we would be happy to sign with someone who pushed us higher.

What made you decide to make this music? Only passion for this genre that is a real lifestyle. If you think of playing Heavy Metal to make as much money, then you have not understood anything. Certainly, in front of an economic return no one would pull back, but must never be the reason for playing. Unfortunately not everyone understands…

What are your songs about? On the one hand there are texts classically Metal with warriors and disasters, other topics apparently discounted but hidden metaphors on which would be worth pondering. Often it happens to be misunderstood or not understood when you write the lyrics and in the past we have often killed for this. Now we think that if a person buys our album, is deep enough to try to understand the real content of a song.

Who does the composing and writes the lyrics? Until now I have been personally involved in the songwriting. Despite this sound with the great guys and together with them we turn a very good idea in a real killer-song.

Do you start with the music or the lyrics? Good question. Sometimes it comes out of nowhere with a good guitar riff, while in other cases a subject interesting me to create a song. Just do not ever plan to write a piece. Must all be born naturally

Do you compose in a certain inviroment? The moment you come out of the notes is something magical and inexplicable. Incredible and fascinating and it can happen at any time.

Have you done any covers live? In the past we have played live tracks of Iron Maiden and Judas Priest and in the studio while we run as bonus pieces of Kreator, Scorpions, Uriah Heep and Grim Reaper.

What language do you sing in? English: the onlyone language for Heavy Metal.

What are the least and most people to attend one of your gigs? Difficult to be exact in the evaluation We played on stage in front of so many wonderful people at festivals. In other cases, we performed in squalid places in front of very few people. It is part of the life of the Metalhead and we must go forward without being killed.

What ages are most of your concert attendants? Usually the age is considered to be very varied. The old lions of the 80 are fortunately near young metalheads who enjoy the concert.

Do you always play the same songs live, or do you vary? When you change elements in training are forced to a limited amount of time to perform more or less the same songs and then gradually add new songs in the set list. Also if you play at a festival Thrash Metal, you try to play the pieces faster than when going to play at a festival Heavy. Finally, keep in mind that each group has its most famous pieces that can not miss on-stage.

Do you have a regular place you play live often? Our place is the regular Atzwang Metal Fest, which takes place every year in South Tyrol in Italy . I recommend everyone to come here. You will then see us, so many interesting bands.

What was your first gig like? The first concert , if we can call it that , was made in a cellar of a hotel of lower category with an audience that did not seem to understand what he was doing there and what was going on. All very comical. Should I have a few pictures on an old VHS.

What was your latest gig? A couple of weeks ago we played near Milan and in a few days we will play a good Metal festival.

Have you had to cancel a gig? Unfortunately sometimes it happened. The causes have been physical accidents, departed people unreliable or bad weather.

Where have you played live this year? This year we have already made some concerts and festivals in Northern Italy and we have tried to reconcile the activities on stage with that studio.